The desire to compile this book stems from standing at The War Memorial in the Bell Park at Castledawson during an annual commemoration service and wondering, who were the men behind the names, what were they like, where and when did they die?
The first list of names available was that which is on the Tablet contained within The War Memorial Hall in Castledawson which was erected in 1929. This Tablet was erected by the local branch of the Ulster Volunteer Force which had been formed in 1912 to oppose the move towards Home Rule. As such this list does not include any nationalist names or indeed anyone who was not a member of the Ulster Volunteers. This book hopefully gives recognition to all who served and made the ultimate sacrifice. When The War Memorial at the Bell Park, was being erected in 1994, the then chairman, Comrade Ronnie Curry carried out extensive research through local churches etc, to make the list as inclusive as possible. The development of the internet has allowed freer access to the records of the Commonwealth War Graves Commission and others.
The initial idea was to have this book ready for the 90th anniversary of the ending of World War I in 2008. Once research had started, the enormity of the task became evident and the initial completion date was soon bypassed. Much more research is always possible, the checking of local newspaper records, The Mid-Ulster Mail and The Northern Constitution which would have carried articles covering the signing up of large numbers of volunteers, particularly in WWI and also regrettably notification of a soldier missing in action or details of death, all this information is hopefully there, but would take months of solid research to uncover. Perhaps a more detailed book would be possible in time for 2018?
We have included in the book details of those servicemen who died in both World Wars and subsequent conflicts who were either born, lived, worked in or whose families, had connections in the area of Castledawson, Bellaghy and Knockloughrim. There is no distinct boundary and in general we have included names uncovered, rather that have the details lost.
We apologise for any omissions or inaccuracies in the details and hope that the public acknowledge that we are working on the information available to us at the time.
We have no details of locals killed during the Boer War in South Africa, Korea or other conflicts on foreign lands.
Anyone having information of any names omitted or indeed additional details on anyone included in the book please contact Sam Hudson, tel. 79632058 or any member of the Castledawson and District Branch of the Royal British Legion. The next step in our remembrance may be the setting up of a website to contain all the details within this book and any which subsequently come to light.
The finishing touches to this book were made in a summer which has seen the death of two of the last British servicemen to have survived WWI, Harry Patch and Henry Allingham. The generation which served in WWI are now gone. Generally the veterans did not talk of their experiences, the memory of the events and comrades being left to those personal silent moments. The recent discovery of the site at Fromelles in France where some 250 soldiers were buried in mass graves is a reminder that much remains untold. Each year that goes by sees the loss of unknown details and stories.
This book is by no means an attempt to glorify war, rather to show the enormity of it and the tragic toll reaped on a small rural community.

THE EXHORTATION
They shall grow not old, as we that are left grow old:
Age shall not weary them, nor the years condemn.
At the going down of the sun and in the morning
We will remember them
Robert Laurence Binyon 1869-1943, written in 1914. 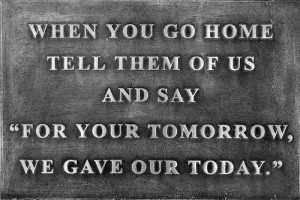 We are grateful for funding towards this project from the
European Regional Development Fund.