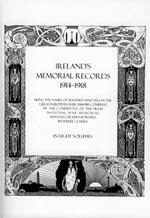 The War Memorial Hall in Castledawson was erected and opened in 1929. The main hall on the first floor contains an Ulster Volunteer memorial to the 30 members who died and the 158 members who served during WWI.
The Hall also contains a memorial to four who died during WWII and a separate memorial to G F Weir from the area who served in WWI and died in service in the Indian Army during WWII.
The hall is now used by the two local orange lodges and each lodge room contains a memorial scroll to their members who died and also those who served in WWI.
The War Memorial, Bell Park was erected by the local branch of the Royal British Legion in 1994 with assistance from Magherafelt District Council.
There are memorials in the following Churches and Halls:
Aughrim Orange Hall –WWI – Pte S Ellis.
Bellaghy Presbyterian Church – WWI and WWII memorials and a memorial to Clifford Evans, The Troubles.
Bellaghy Church of Ireland – David McQuillan, The Troubles.
Castledawson Church of Ireland – William Church Mann WWII.
Curran Masonic Hall – WWI and The Troubles.
Curran Presbyterian Church – WWI and WWII.
Termoneeny Parish Church, Knockloughrim – WWI Masonic memorial and a memorial to Robert Lennox, The Troubles.
2
Ireland’s Memorial Records
The Roll of Honour listing over 49,000 of Irish birth or residence at the time of death, who served and died during the Great War.
In the early 1920s £5,000 of the National War Memorial funds were spent collecting the records of all the fallen and publishing them in Ireland’s Memorial Records. One hundred copies of the eight-volume set were printed ‘for distribution through the principal libraries of the country’. The printing, decoration and binding of the volumes was carried out by Irish artists and workers of the highest reputation and efficiency’. The most remarkable feature of the volumes is the ‘beautiful symbolic borders designed by the artist Harry Clarke, best-known for his work in stained glass. Contained in the eight volumes are the details of over 49,000 fatal casualties. The men and women commemorated either served in Irish Regiments or were born or were resident in Ireland at the time of their death and were serving with units from Britain and its empire. The principle information given for each person, whereas being similar to Soldiers Died in the Great War, quite often contains additional facts such as age, and elaboration on how killed etc. For example, the entry, ‘died of wounds received in Sinn Fein Rebellion’ has been noticed. Details of pre-war medal entitlement and other odd facts occasionally occur. This is the only publication to bring so many of the Great War dead from Ireland together in order that they may be individually and collectively honoured and remembered.
A copy of these volumes is held in St. Columb’s Cathedral in Londonderry and can be inspected by arrangement. A Copy of these records is kept in the book-rooms at the National War Memorial in Dublin.