Of the 188 Ulster Volunteers named on the plaque in the Memorial Hall, who joined up, 30 were to lose their lives.

The First World War was a horrendous loss of life on both sides. Records show following details:

The overall total includes allies on both sides, Canada, Australia, New Zealand, France, America, Austria, Hungary, Turkey etc.
While fatalities are generally recorded on War Memorials it is important to remember also those who were injured and indeed the mental impact on those who were not physically injured.

Public memorials to the dead of the Great War have their beginnings in the Government’s decision in 1915 that the bodies of the dead should not be brought home. This was a clear change of policy from previous conflicts, when those families who could afford to were free to repatriate the bodies of their relatives.
The Government effectively took possession of the bodies, dictating where and how they would be buried, along with what kind of headstone or memorial would mark their graves. These were all questions which had previously been resolved by the families of the dead, and the Government’s decision removed any opportunity for families to have any say in the arrangements being made for their loved ones.
This decision (which, not surprisingly, proved extremely controversial) thus presented those at home with a painful difficulty. Traditionally, rituals of grief and mourning were focused around the body of the deceased, funeral services and the ability to visit a grave offering some degree of consolation to the bereaved. For those whose friends and relatives had died in the war, no such consolation was available. Bodies lay on foreign battlefields with names which were difficult to spell and pronounce, too distant to visit even if the war had not made such travel a difficult and dangerous undertaking.
For many, even the knowledge that their loved one had been properly buried was denied to them. Instead, they had simply disappeared, registered as ‘Missing,’ a classification which harboured more than enough uncertainty to nurture numerous hopes, doubts and insecurities.
The Armistice in 1918 brought an end to the war but it could not resolve such difficult and personal issues. It became clear that the Government’s 1915 decision would not be reversed: the bodies of the British Empire’s war dead would remain, broadly speaking, where they had fallen. The Imperial War Graves Commission began its task of commemorating each of the Empire’s dead, regardless of whether or not they had a known grave, constructing cemeteries and memorials on the former battlefields.
At home, however, people were forced to come to terms with the fact that the dead would not be returning. A terrible absence had been created at the heart of communities. If this absence were to be made visible, and the grief of both individuals and the community more generally acknowledged, some new form of commemoration would have to be found.
Yet even then in 1918 war memorials in themselves were not a new concept. Memorials to the dead of the recent Boer War could already be seen inside churches and sometimes in public places. What made the Great War different was the sheer scale of the conflict. Never before had so many men and women offered their services to the armed forces, and never before had so many lost their lives as a result of that decision. (Source: The War Memorials of Co. Antrim by Catherine Switzer.)
To provide some focal point for the relatives, the government War Office sent each bereaved family a letter of condolence from King George V and also a commemorative plaque which would come to be known as a ‘Dead Man’s Penny’. Copies of these letters and plaques are shown within the book.
The War Office provided a Portland headstone for each of the graves. Next of kin were afforded the opportunity, at a cost of adding a personal message on the inscription.
For some families there was the torturing knowledge that their loved one did not have a grave. In some case later shelling destroyed the earlier makeshift graves and again for many the only report was that their loved one was “missing, presumed dead”. Memorials like The Menin Gate Memorial, at the eastern side of the town of Ypres (now Ieper) in the Province of West Flanders, France, on the road to Menin and Courtrai, were erected to give a focus to those whose relatives had “no known grave”. It bears the names of 55,000 men who were lost without trace during the defence of the Ypres Salient in the First World War. Designed by Sir Reginald Blomfield and erected by the Imperial (now Commonwealth) War Graves Commission, it consists of a “Hall of Memory”, 36.6 metres long by 20.1 metres wide. In the centre are broad staircases leading to the ramparts which overlook the moat, and to pillared loggias which run the whole length of the structure. On the inner walls of the Hall, on the side of the staircases and on the walls of the loggias, panels of Portland stone bear the names of the dead, inscribed by regiment and corps.
Carved in stone above the central arch are the words:
TO THE ARMIES OF THE BRITISH EMPIRE WHO STOOD HERE FROM 1914 TO 1918 AND TO THOSE OF THEIR DEAD WHO HAVE NO KNOWN GRAVE.
Over the two staircases leading from the main Hall is the inscription:
HERE ARE RECORDED NAMES OF OFFICERS AND MEN WHO FELL IN YPRES SALIENT BUT TO WHOM THE FORTUNE OF WAR DENIED THE KNOWN AND HONOURED BURIAL GIVEN TO THEIR COMRADES IN DEATH.

In this book where the entry does not give a grave number but rather a panel number, this generally signifies that there is no known grave. 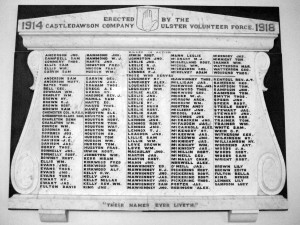 The Ulster Volunteer Force World War I plaque on the first floor of the War Memorial Hall, Castledawson. 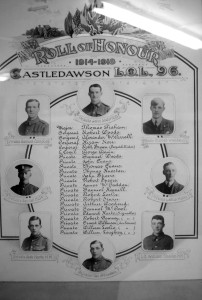 The LOL No.96 Roll of Honour in the War Memorial Hall, Castledawson. 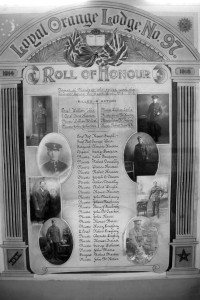 The LOL No.97 Roll of Honour in the War Memorial Hall, Castledawson.