The number of local servicemen and women who died in World War II was significantly less than those in World War I, although WWII was more worldwide and overall a greater number in total were killed. Records show the following:

The First World War was a horrendous loss of life on both sides. Records show following details:

While in WWI the area had 70 casualties only 12 were lost in WWII. 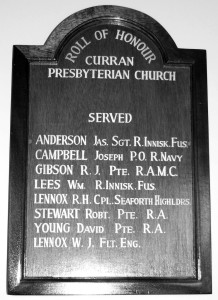 The plaque to those who served during World War II in Curran Presbyterian Church.